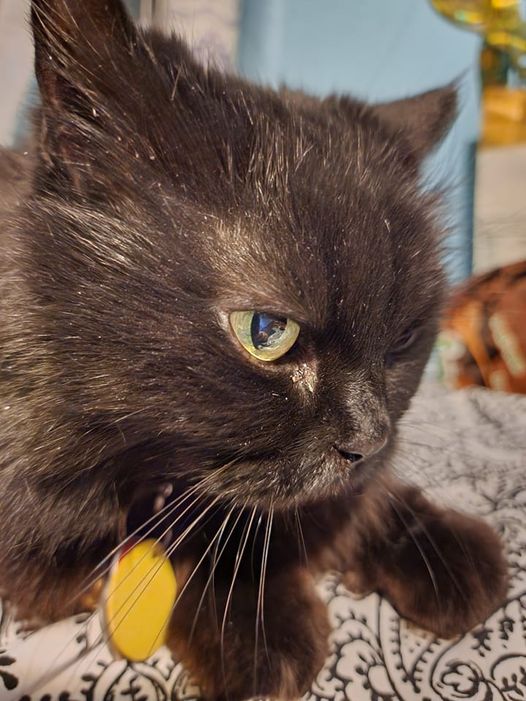 Just starting THE MARLOW MURDER CLUB by Robert Thorogood. 1st of 2 in series featuring Judith Potts, a septuagenarian crossword compiler, Suzie Harris, a dog-walker, and Becks Starling, the vicar’s wife, on the River Thames, in England. 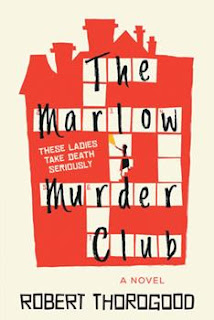 Meet Judith: a seventy-seven-year-old whiskey drinking, crossword puzzle author living her best life in a dilapidated mansion on the outskirts of Marlow. Nothing ever happens in Marlow. That is, until Judith hears her neighbor shot while skinny-dipping in the Thames. The local police don't believe her story. It's an open and shut case, of course. Ha! Stefan can't be left for dead like that. Judith investigates and picks up a crew of sidekicks: Suzie the dogwalker and Becks the vicar's wife. Together, they are the Marlow Murder Club.When another body turns up, they realize they have a real-life serial killer on their hands. And the puzzle they set out to solve has become a trap from which they might never escape…

Published 2021 or 2022 (info says both); 353 pages. Nominated for an Edgar award for best cozy, The Lilian Jackson Braun Memorial Award.

With the 100 Day Project starting in about three weeks. I'm starting to narrow in on the ideas. I'm getting close to a winner.

No plans for the evening other than the usual.

Posted by PK the Bookeemonster at 9:48 AM No comments: 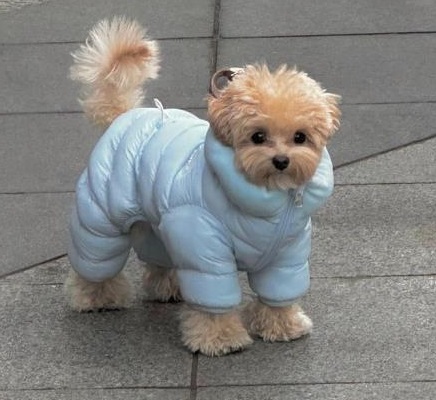 I started and finished THE THREE DAHLIAS by Katy Watson. 1st of 2 in series. 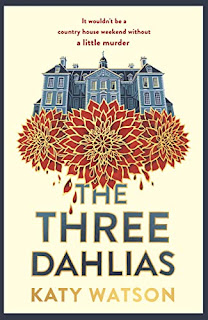 In attendance: the VIP fans, staying at Aldermere; the fan club president turned convention organizer; the team behind the newest movie adaptation of Davenport's books; the Davenport family themselves - and the three actresses famous for portraying Lettice's 1930s detective, Dahlia Lively. National treasure Rosalind King, from the original movies. TV Dahlia for thirteen seasons, Caro Hooper. And ex-child star Posy Starling, fresh out of the fame wilderness (and rehab) to take on the Dahlia mantle for the new movie. Each actress has her own interpretation of the character - but this English summer weekend they will have to put aside their differences, as the crimes at Aldermere turns anything but cosy. When fictional death turns into real bodies, can the three Dahlias find the answers to the murders among the fans, the film crew, the family - or even in Lettice's books themselves?

And I finished THE BUTTERCREAM BUMP OFF by Jenn McKinlay. Enjoyable. I gave it 3 out of 5 stars so I liked it.

I'm absolutely shocking myself with my reading. I've finished 14 books this month.

I know it's not sustainable, but I really do want to keep up this pace as much as possible because I have so much to read.

I auditioned a couple other books for my next read but I'll be sticking with another of my "23 in 2023" books, THE BLADE ITSELF by Joe Abercrombie. 1st of The First Law Trilogy. Fantasy. 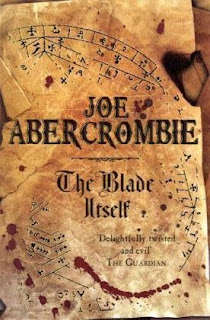 Logen Ninefingers, infamous barbarian, has finally run out of luck. Caught in one feud too many, he's on the verge of becoming a dead barbarian -- leaving nothing behind him but bad songs, dead friends, and a lot of happy enemies. Nobleman, dashing officer, and paragon of selfishness, Captain Jezal dan Luthar has nothing more dangerous in mind than fleecing his friends at cards and dreaming of glory in the fencing circle. But war is brewing, and on the battlefields of the frozen North they fight by altogether bloodier rules. Inquisitor Glokta, cripple turned torturer, would like nothing better than to see Jezal come home in a box. But then Glokta hates everyone: cutting treason out of the Union one confession at a time leaves little room for friendship. His latest trail of corpses may lead him right to the rotten heart of government, if he can stay alive long enough to follow it. Enter the wizard, Bayaz. A bald old man with a terrible temper and a pathetic assistant, he could be the First of the Magi, he could be a spectacular fraud, but whatever he is, he's about to make the lives of Logen, Jezal, and Glokta a whole lot more difficult. Murderous conspiracies rise to the surface, old scores are ready to be settled, and the line between hero and villain is sharp enough to draw blood.

Tonight is Monday Sprint night with the cozy mystery group on YouTube. I'll miss half because it starts at 5 but it's nice to tune in. And that's about it. Feed Ryker and Steve, read, and bed.

Posted by PK the Bookeemonster at 10:11 AM No comments: 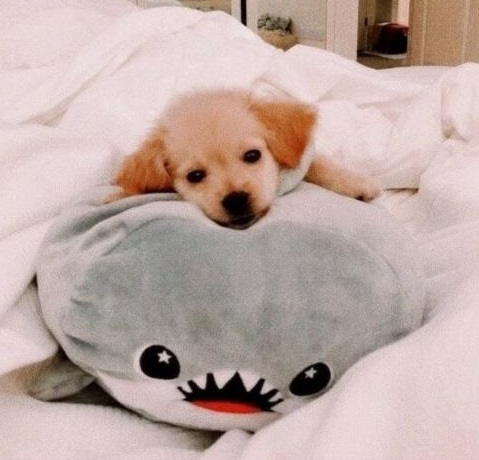 Well, got through another week. It was a tough one. I'm ready for the weekend. As mentioned previously, my usual Saturday afternoon bead group was canceled so I'll be staying home both days.

I finished the Will Thomas. I have both a cozy mystery going and a category romance book. I could read those. I could. Will I?

I have a rom-com on loan from the Las Vegas Library but both books up there are light like that. Perhaps I need something a little heftier.

And there will be napping, having Thai Beef Salad, maybe cleaning a closet along with a lot of reading.

Posted by PK the Bookeemonster at 11:51 AM No comments:

That's not fair ... the week was getting better 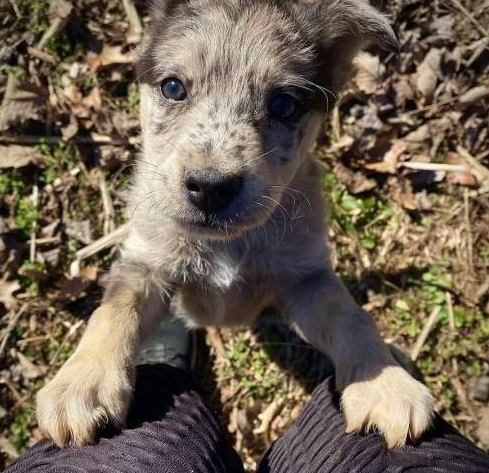 Thursday. Receptionist out sick so this will have to be quick.

Tonight I have a reading sprint to participate in via YouTube and we have BattleBots to watch on TV. I'm at 70-something percent on the Will Thomas book so I should be finishing that this evening.

And SO MUCH MORE to read. Gotta keep movin'.

Posted by PK the Bookeemonster at 10:21 AM No comments:

Evening plans (minus the cat) 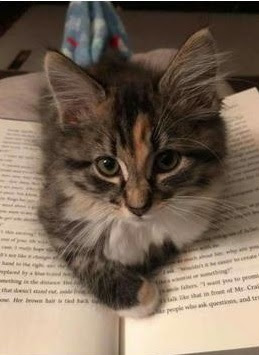 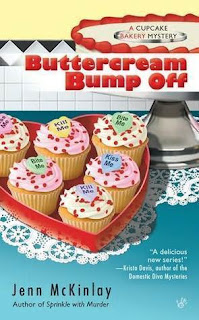 Melanie Cooper and Angie DeLaura's Fairy Tale Cupcakes bakery is gearing up for Valentine's Day. Unfortunately someone has iced Baxter Malloy on his first date with Mel's mother. Now Mom's a suspect, and Mel and Angie need to find time around frosting to dig into the man's shady past and discover who served him his just desserts.

Because when it comes to reading or beading, I suffer from "ooo shiny syndrome". The more the merrier.

The date for this year's 100 Day Project has been announced. 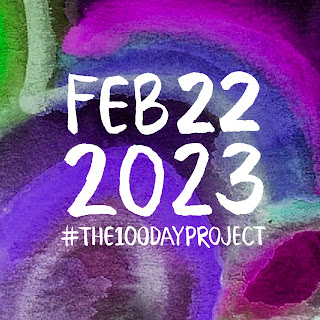 I think I'll be doing it again this year but doing something much easier this time around -- avoiding the self-imposed pressures I put on my self last time. I think I'll be doing some lettering practice. I'm doing the bullet journaling, I'd like my handwriting to be prettier. I don't want to do calligraphy, but lazy-person's version of it. Just  being creative for ten minutes a day as it was intended.

Our bead group on Saturday is canceled again and I'm secretly glad. The weather is going to be yucky again according to the forecast. It will be easier for me to participate in the reading sprint of the cozy group I follow on YouTube. And it is just nice to stay home and relax on weekend.

Posted by PK the Bookeemonster at 1:48 PM No comments: 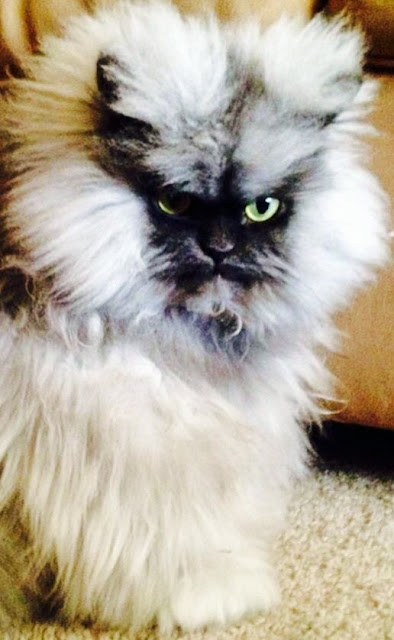 Tuesday. What a day yesterday was.

When I got home last night, after a no good very bad day, I discovered Ryker had had diarrhea all up the carpeted stairs. So the fun continued.

I did manage to read a little bit later. I certainly wasn't in the mood for love story angst -- just communicate already! -- so I read in the Will Thomas. I will probably do the same tonight after the live stream of the ticket drawing for Thunderhorses bead shop.

It's been crazy again today but not as bad as yesterday. Example, the Certified Payroll I did yesterday was accidentally deleted so I had to do it again today. Steve is in his continuous bad mood. I'll be glad when some of this pressure eases off.

The running away and having a Tiki bar on a deserted beach sounds good. Have a good day

Posted by PK the Bookeemonster at 11:45 AM No comments:

Why did the weekend have to end? 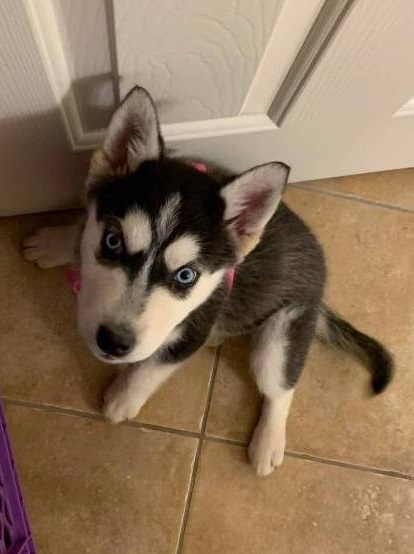 Monday. And, boy, is it Monday.

I mostly just read this weekend. I finished the Renee Patrick historical mystery. I liked it more than I thought I would. I gave it four stars and I'll read the next in the series.

Looking for something different to read next, i.e., a sci fi book, I read and finished ASTRAY by Jenny Schwartz. 1st of 5 in The Adventures of a Xeno-Archeologist scifi series. 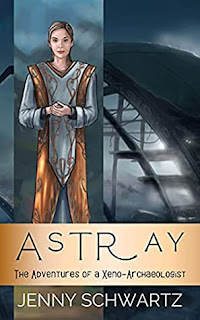 Nora Devi is a xeno-archaeologist with a complicated past. She has buried more secrets than she’s dug up. Widowed in the recently ended twelve year war between Capitoline and Palantine, she now makes a living as an independent tagger in border space. Captain Liam Kimani could be credited with ending the latest royal war. Instead, he’s blamed for it. Dirty commoners aren’t meant to lay their hands on royalty. He has no regrets. When Liam and his crew of the battlecruiser RC Genghis Khan are exiled to Capitoline’s border they discover that life in unexplored space can be more dangerous than war, and that their best chance of survival lies with a mysterious, elusive tagger. The only problem is that Nora’s secrets might destroy the precarious stability of the entire Human Sector.

Published 2021; 233 pages. I liked it WAY more than I thought I would on this one, too. I'll definitely be reading this series.

One of the book YouTubers I watch is very into romances. She recommended this author. I got the book from the Las Vegas library. So currently reading HER HOMETOWN MAN by Shannon Stacey. 1st in Sutton's Place Harlequin Special Edition series. 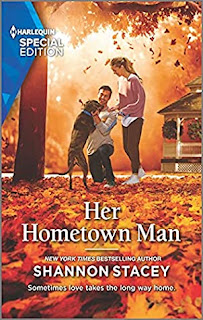 She has many reasons to leave
He’s the best reason to stay
Summoned home by her mother and sisters, novelist Gwen Sutton has made it clear—she’s not staying. She’s returning to her quiet, writerly life as soon as the family brewery is up and running. But when Gwen’s lifelong crush, Case Danforth, offers his help, it’s clear there’s more than just beer brewing! Time is short for Case to convince Gwen that a home with him is where her heart is.

Published 2021; 256 pages. I'm actually liking it. It feels very much like that Hallmark series Chesapeake Shores. 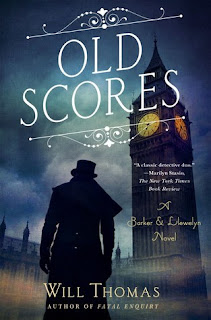 In 1890, the first Japanese diplomatic delegation arrives in London to open an embassy. Cyrus Barker, private enquiry agent and occasional agent for the Foreign Service Office, is enlisted to display his personal Japanese garden to the visiting dignitaries. Later that night, Ambassador Toda is shot and killed in his office and Cyrus Barker is discovered across the street, watching the very same office, in possession of a revolver with one spent cartridge. Arrested by the Special Branch for the crime, Barker is vigorously interrogated and finally released due to the intervention of his assistant, Thomas Llewelyn, and his solicitor. With the London constabulary still convinced of his guilt, Barker is hired by the new Japanese ambassador to find the real murderer.

The coffee shop was cancelled on Saturday which was actually rather nice. Tonight I have another reading sprint to participate in.

Posted by PK the Bookeemonster at 10:35 AM No comments: 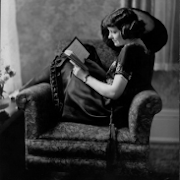 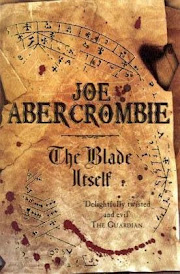 THE BLADE ITSELF by Joe Abercrombie 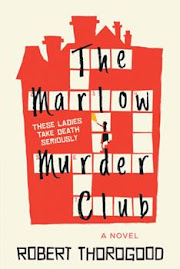 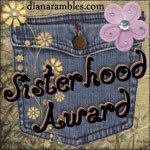